Warning: A non-numeric value encountered in /home/customer/www/muruca.org/public_html/wp-content/themes/Divi/functions.php on line 5841

From the Past to the Future. Some reflections after DH2016 #3 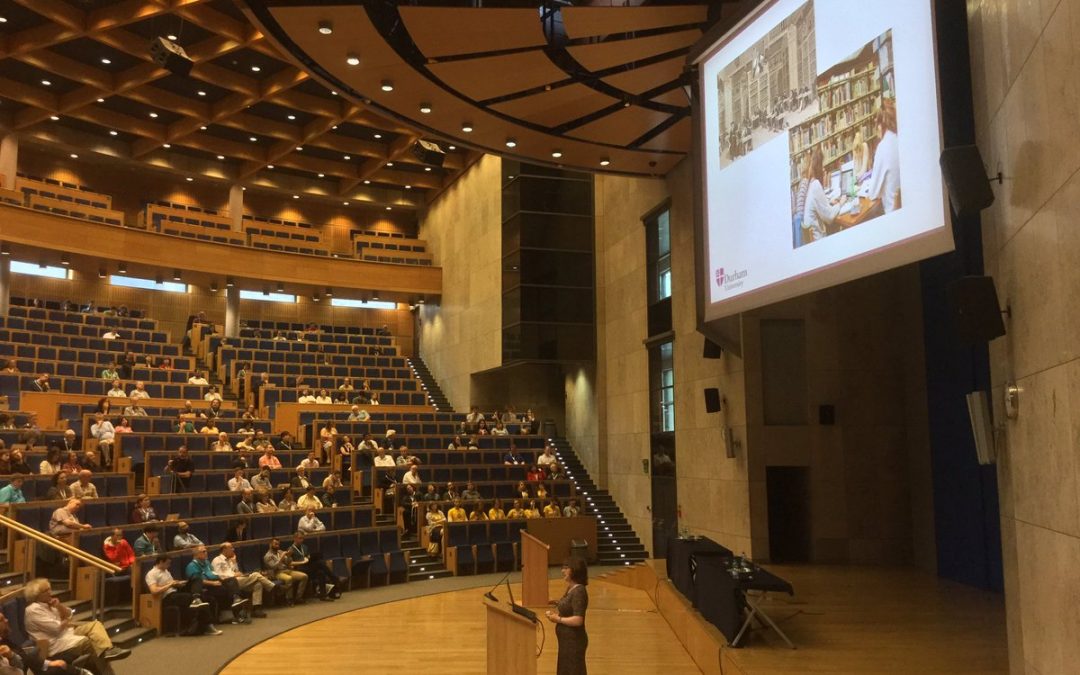 My third and last suggestion concerns some thoughts inspired by Claire Warwick‘s keynote at the closing ceremony of DH2016: “Touching the interface: Bishop Cosin and unsolved problems in (digital) information design”. Warwick stressed the importance of physical libraries in the education of young generations in the past. Significantly, young people continue to use libraries as a place for learning, a hybrid place that nowadays mixes the analogic with the digital (a suggestive photo showed a group of students at the library, where tables were sprinkled of laptops and annotated books).

The challenges that Claire Warwick outlined from these opening remarks are well summarized in her abstract:

“Some problems in the design of digital resources have turned out to be unexpectedly difficult to solve, for example: why is it difficult to locate ourselves and understand the extent and shape of digital information resources? Why is digital serendipity still so unusual? Why do users persist in making notes on paper rather than using digital annotation systems? Why do we like to visit and work in a library, and browse open stacks, even though we could access digital information remotely? Why do we still love printed books, but feel little affection for digital e-readers? Why are vinyl records so popular? Why is the experience of visiting a museum still relatively una ected by digital interaction? The answer is very emphatically not because users are luddites, ill-informed, badly-trained or stupid.”

I will argue that the reasons these problems persist may be due to the very complex relationship between physical and digital information, and information resources. I will discuss the importance of spatial orientation, memory, pleasure and multi-sensory input, especially touch, in making sense of, and connections between physical and digital information. I will also argue that, in this context, we have much to learn from the designers of early printed books and libraries, such John Cosin, a seventeenth-century bishop of Durham, who founded the little-known marvel that was the first public library in the North of England, and still exists, intact; one of the collections of Durham University library.”

As I wrote in this commenting tweet, these are key issues for which, in my opinion, there has been little or no reflection on the usability limits of the tools available for humanists and, more in general, for scholars:

I expected a few more words on how to make more usable tools and digital environments. A lack in #DH2016. Hope in #DH2017

The tweet originated from a spontaneous thought – which had been constant throughout the conference, and which became clearer to me in the final lecture proposed by the Professor of the University of Durham – that we seem to be developing tools which although powerful and useful focus on the ideas of the people that conceived and use them, but very little on user needs.

I’m convinced that usability and user experience studies are closely related to open access to knowledge; moreover, that considering user-centered experience is a condition for the openness of knowledge.
This entails rethinking the idea of the digital library by making it free from the constraints that still shape the physical one. We could imagine it, abstractly, as a set of structured data – replicated in different standard formats in numerous repositories – potentially federated. Data and its relations increase their meaning through interfaces designed from user experience studies. Following this line of thought, there would be  many different interfaces, thus reflecting the different interpretations they are built upon. Interfaces would be a sort of new form of scholarly publication which, starting from common and shared data, displays interpretations in original ways. At a different level, tools enable individual and groups of scholars working with research data to manage complex workflows. But tools should go back to being means and not ends in themselves, and more attention should be given to the ways through which we offer our data interpretation by means of the visualizations we propose.

We should make sure that data is well-structured and secure, and then give more space to the way we want to represent data, knowing (and hoping) that others will come later and that they will, in turn, offer new data interpretations and representations in new forms. We have to focus more energy on the design of such views, not accepting as a fact that the analogic tactile and physical world, necessarily responds better to our needs for accessing, understanding, and consolidating knowledge. And we should not forget that the difficulties we face in our relations to objects and spaces, both physical and digital, depend more often on the inability of the designers of such objects and spaces than on our limitations. Donald Norman explained this clearly in “The Design of Everyday Things”, a classic that leads us to also consider the design as a matter of accessibility, and hence of openness. It could be a prospect, among many others, through which to look at the issue of “access”, to which the DH2017 conference in Montreal will be dedicated.

From the Past to the Future. Some reflections after DH2016