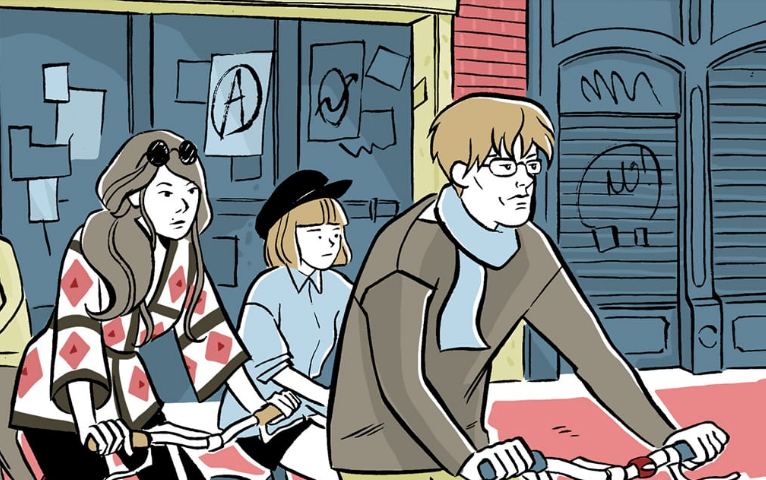 As a member of a team coordinated by Université Pierre et Marie Curie – Paris 6 in partnership with La Bande Destinée, a French communication agency, Fiammetta Ghedini is working in ERCcOMICS, a 4-year project of the European Research Council that exploits the power of visual story-telling through comics.

The idea behind ERCcOMICS is to make important discoveries understandable to a general public and through a creative and popular means: comics. In practice, the project promotes and explains the achievements of 16 ERC funded projects through 16 comics which are produced in close collaboration between scientists and artists.

We asked Fiammetta to answer some questions about the project she’s working on:

1) How did you get the idea of explaining highly specialized research projects by using comics?

I come from the world of research, but I have always been really into comics!

I have been working for some years in the Sony CSL research laboratory in Paris, as part of an ERC project that is being funded by the European Research Council. Ten years ago when the European Union decided to embark on this kind of funding they made a historic decision: rather than opting for partnerships with all the related bureaucracy, they decided to support individual researchers who have a personal and innovative vision for their research project. In my case, I’m working on a project entitled Flow Machines, which aims to develop systems that are able to compose music (the first two songs composed by Flow Machines can be found here).

This project spawned a collaboration with Massimo Colella, the founder of a communications agency in Paris, La Bande Destinée. The idea of making a comic regarding the Flow Machines projects and then for other scientific projects just came about naturally.

2) How did you choose the projects to explain via a comics format?

ERC projects tend to arouse the curiosity not only of scientists but also of the general public. We choose projects based on their narrative potential and the potential impact on society. For example, this year we chose Flow Machines, i.e. my project, in this case the comic is entitled Max Order, which is an algorithm but also the main character. We also selected some research on invisibility which combines optics and the theory of relativity (… and the invisible). Then there is a project on how standards of beauty are produced and disseminated (Beauty). And finally there is some research on vines (the ones on trees, not the ones that produce grapes). In fact, vines are proliferating like never before in the rain forests because of the greenhouse effect, and this spread could have a significant impact on our future (Treeclimbers).

As for the second year, we plan to cover neurosciences, migrants and astrophysics.

3) So how has the first year of the project gone? What difficulties have you encountered? What new challenges have emerged?

It’s gone very well. The researchers are really enthusiastic about the initiative and have fully embraced it. They often tell us that working with us means thinking about their research in terms of a narrative and also with a visual approach, and this helps them to better define the problems, to have new ideas and to reflect on the impact of their research. The biggest challenge of ERCcOMICS is that we do not want to create comics that merely explain science in schools. Instead we want research to be an inspiration for the comics and vice versa. Working with professional designers, we want to create comics that people really feel like reading, . This is a far cry from creating didactic comic books, which may end up being misunderstood. So this is a key point of our vision, which we are not going to give up on!

4) So here’s a more general question. In Europe, there is no doubt that there is problem of dissemination. On the one hand the focus is on impact and how research can manage to reach a general public. On the other, the evaluation systems are based on a dissemination paradigm with “traditional” indicators (Impact Factor and bibliometric indices). So how does your project fit in to this? And how do you resolve the impact problem?

The EU’s goal when they published the ERC-Support was to create a tool that would go beyond “traditional” dissemination, which may be OK for the scientific academia but which rarely reaches a wider audience. The goal of our project is thus to explain the current frontiers of science to the “general public”, without making the topics superficial or trivial. Instead we use the topics as a source of inspiration, without ignoring, as far as possible, the level of depth of the research. So at the end of each chapter of our comics, we ask researchers to write a paragraph mentioning key references and also to write a few comments on the content of the chapter. To do this we write our stories in close collaboration with the researchers.

As for the impact assessment regarding “widespread” dissemination, I don’t feel there is any need to invent a specific system such as the h-index. I think that we should simply follow how the “real world” approaches the problem: how many people visit our site, how many follow us on social networks, how many different forms of media talk about us. We are only in the first year and we are quite satisfied so far, but of course we will try to maximize our visibility in the future.

5) Finally,  a request of a more personal nature. I saw that you did classical studies in high school, and then you did art history at university, and finally a PhD in Neurosciences at Sant’Anna. So now you’re looking at the practice of art, and in particular comics. Is there some kind of underlying thread to all this? And more in general, what brought you to where you are now?

I answer that question with a comic …

I had the good fortune to meet Jorge Cham who created a cult series for all students (PhD Comics). We met in London when I was studying neurosciences in Professor Zeki’s lab.

The truth is that each student has a secret plan: mine has always been to create comics!